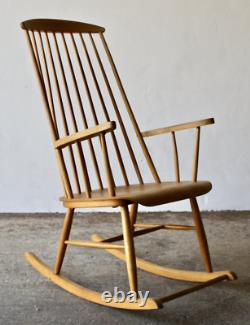 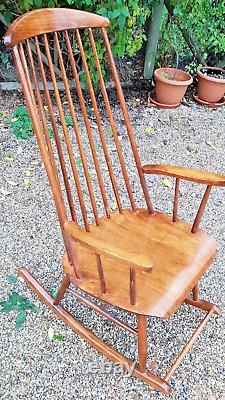 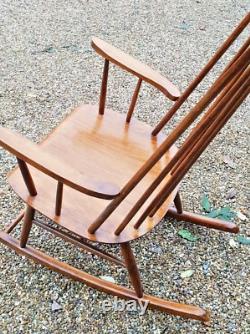 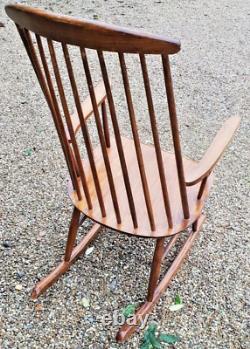 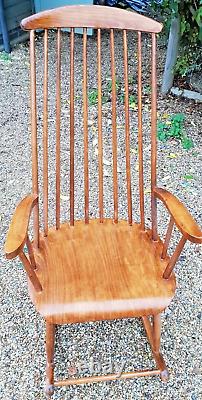 Mid Century Rocking Chair Design Ilmari Tapiovaara Finnish Famous Designer Vintage'60s. First photo is from the web to better show beautiful shape of the chair. The rest of the fotos show actual chair for sale. All original condition, furniture was not restored by ourselves. Timeless modern Finnish design icons.

Solid sturdy furniture, will last forever. See photos for condition please. Any questions please let me know. Thank you for your interest and time.

Modernist designer Ilmari Tapiovaara was born in Hämeenlinna, Finland in 1914. He studied interior design and industrial design at the Institute of Industrial Arts in Helsinki, graduating in 1937. While still a student, he worked for.

After school, Tapiovaara worked as an assistant for six months at modernist architect. Around that period, he and his wife, Annikki, began taking on interior design projects for clients such as the Domus Academy (1946-47) and the Tech Student Village (1951).

The pair opened their Helsinki office around 1950, focusing on furniture and industrial design commissions for numerous companies. While Tapiovaara is best known for interiors and furniture, he also designed lighting, glass, textiles (often in collaboration with his wife), cutlery, and radio and stereo components through the mid 1970s. Tapiovaara was a great admirer of Finnish architect-designer.

And his work was decidedly function-driven. He also had a strong sense of social responsibility; set against the backdrop of Finland's postwar era, Tapiovaara took a democratic approach to design, believing everyone should have access to affordable, good design. For example, the stackable, birch plywood Domus chair (1946)-originally designed for the Domus Academy and arguably Tapiovaara's most famous piece-was designed such that several chairs easily fit into small crates for efficient export (by the millions) to the United States. During the late 1950s, he traveled to Paraguay to design furniture on behalf of the UN development program; he did a similar project in Mauritius during the mid-1970s.

Tapiovaara also taught: He was employed as a teacher at the design school of the Illinois Institute of Technology from 1952-53, and he taught interior and industrial design at the Institute of Industrial Art in the 1950s and later from the 1970s to the mid-1980s. Tapiovaara exhibited extensively, and earned several honors, including: gold medals for his chairs at the Milan Triennials in 1951, 1954, 1957, and 1960; a Good Design award in Chicago in 1950; the Finnish State Design award in 1971; a prize form the Finnish Culture Foundation in 1986; and the Furniture Prize of the SIO Interior Architects' Association of Finland in 1990. He passed away in 1999. Notably, in 2014, the Designmuseo in Helsinki hosted a retrospective of his work, including furniture and drawings, on the centennial of his birth. The same applies to certain items which contain pieces of glass that may not comply with current safety standards and therefore, as with antiques, should not be relied upon to meet current regulatory safely standards.

As with most glass products, sensible precautions should be adopted which would include, but is not limited to, never placing hot objects on glass surfaces and understanding that (due to their age) glazed units, glass shelves and surfaces are unlikely to be made from safety glass and will thus have limited strength and weight-loading capacities. This item is in the category "Home, Furniture & DIY\Furniture\Chairs". The seller is "marc-jasi" and is located in this country: GB. This item can be shipped to United Kingdom.